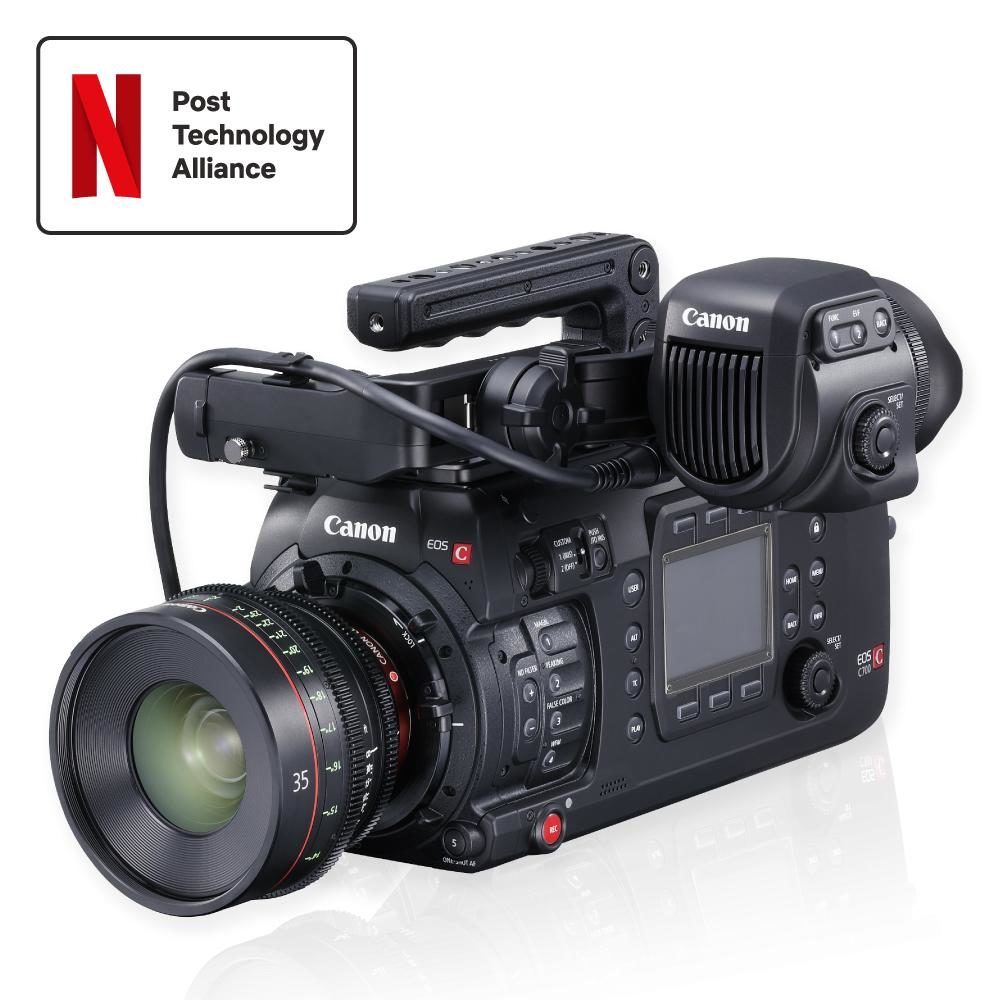 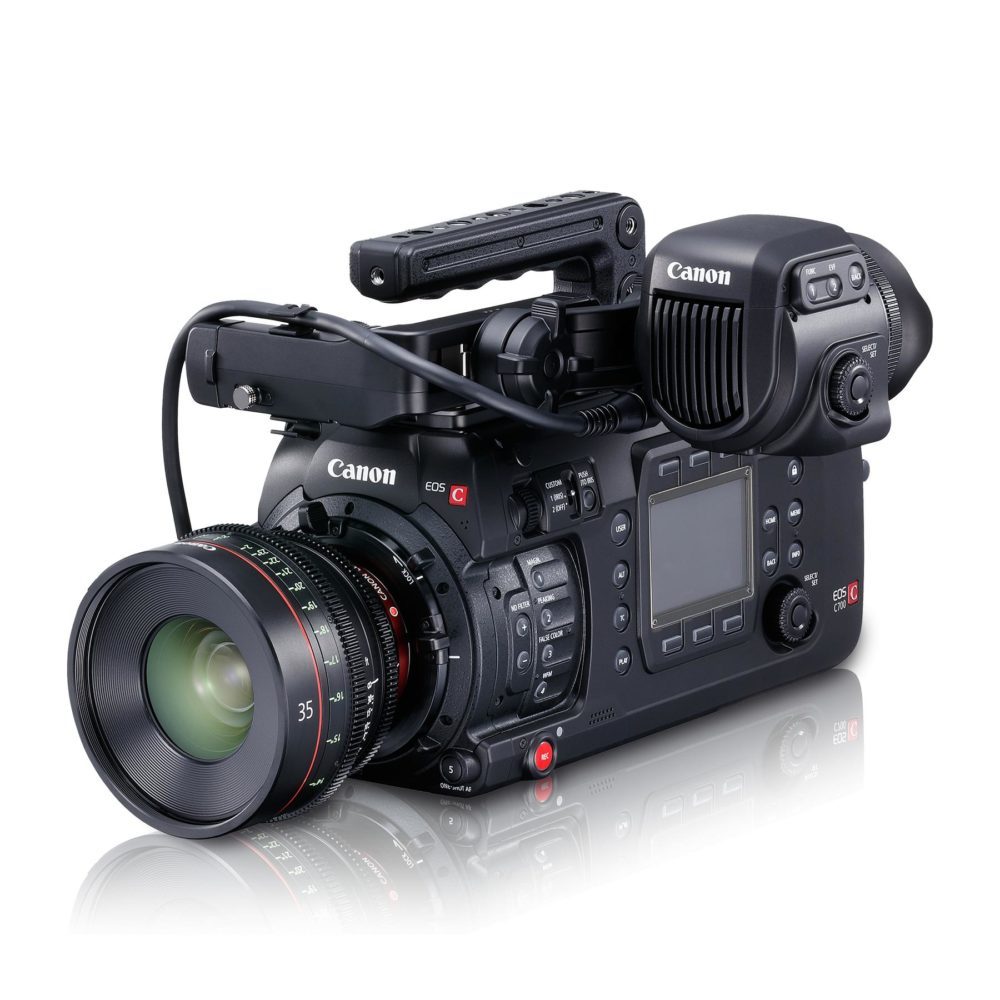 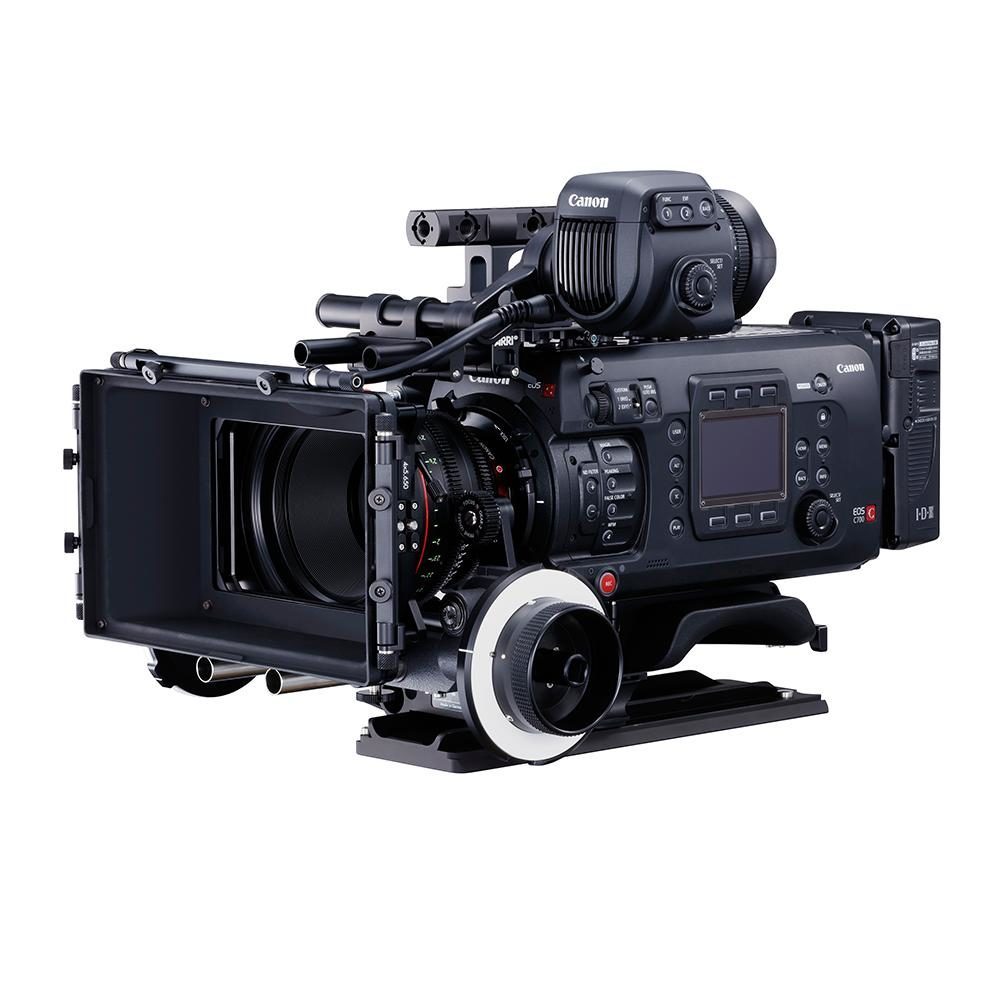 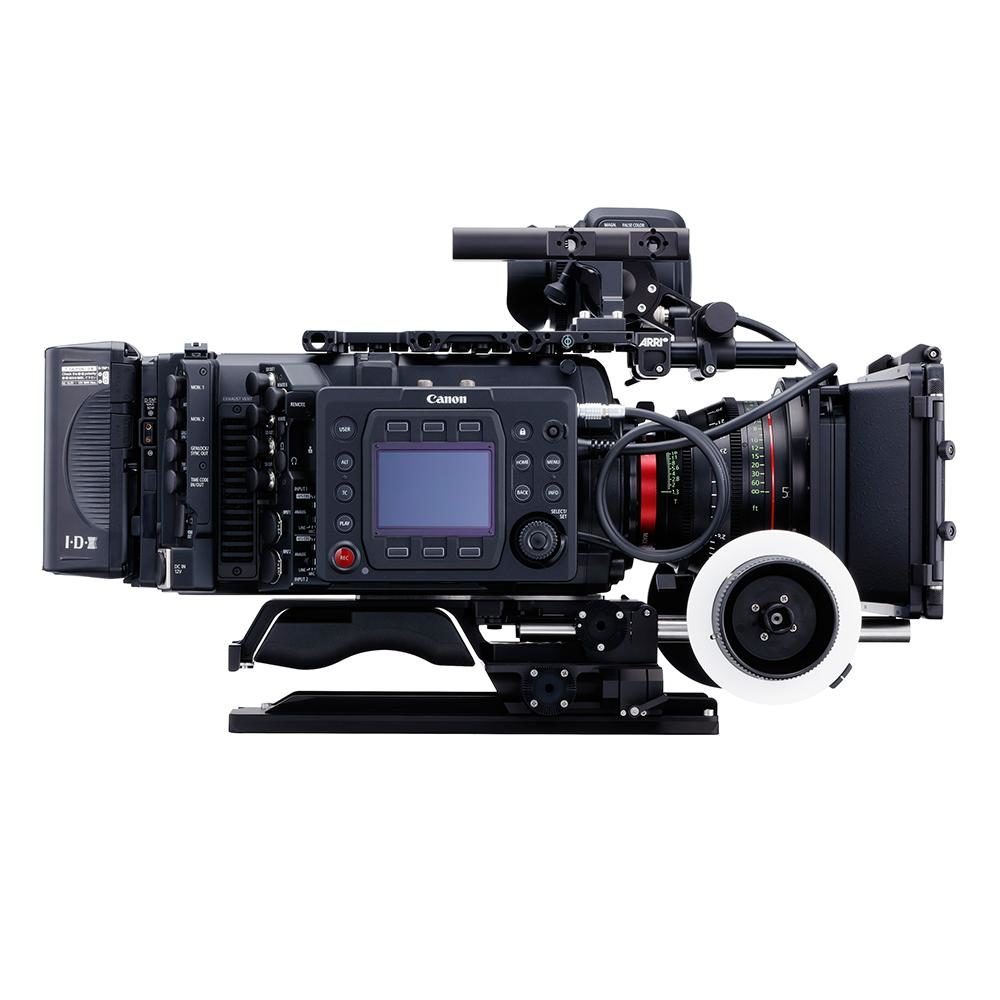 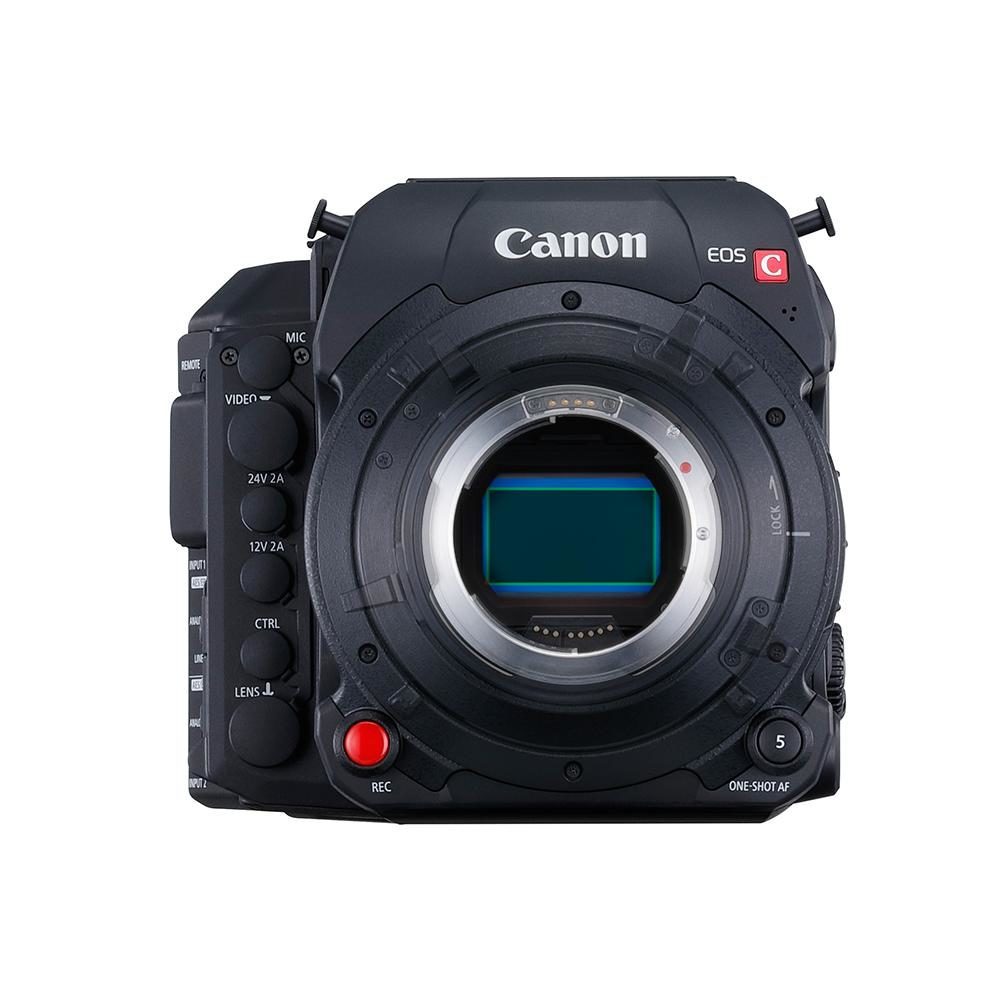 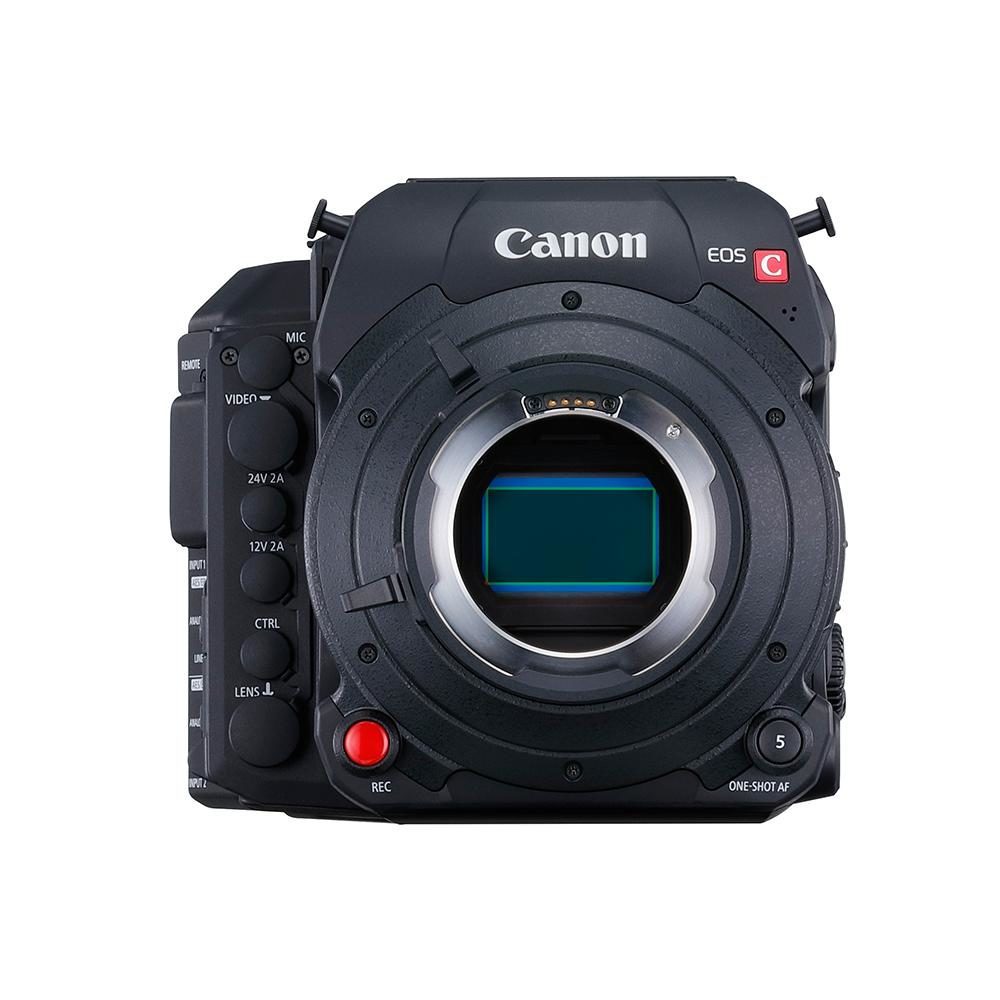 The flagship - now with full-frame

The EOS C700 FF is available in EF and PL mount options.

*For EF and PL Mount models. Prices and specifications subject to change without notice. Actual prices are determined by individual dealers and may vary.

The EOS C700 FF Digital Cinema Camera offers a new full frame 5.9K CMOS sensor (38.1 x 20.1mm) with a 17:9 aspect ratio. In addition to full frame lenses, the camera can also be used with conventional Super 35mm lenses, and supports both anamorphic and spherical lenses. The sensor is capable of capturing footage in a wide variety of aspect ratios.

The EOS C700 FF Digital Cinema Camera features a modular design which allows for a wide range of shooting applications, supporting a variety of workflows. The EOS C700 FF is a full size cinema camera allowing for both traditional studio style and handheld configurations.

The camera body includes built in cheese plates with numerous 3/8-16 and 1/4-20 threaded holes on the top and bottom to easily attach accessories. The top handle attaches in a variety of positions in order to achieve optimum balance.

The Codex Recorder allows recording not only 5.9K RAW, but also ProRes at significantly higher frame rates than internal CFast Cards. When recording, RAW files are saved as a .RMF frame sequence in an uncompressed format with no "baked in settings." Clip development can then be easily adjusted in post using the downloadable Canon Raw Development (CRD) software.

Canon XF-AVC Recording:
The EOS C700 FF can record XF-AVC to two CFast 2.0 card slots on the camera right side of the camera. XF-AVC and ProRes formats (along with metadata) can be simultaneously recorded to either or both CFast cards. Simultaneous recording is helpful, for example, where one card might go to the post house and the other could be stored safely in the production company's archive.

Relay recording is also possible for situations where changing cards and losing precious seconds is not an option, such as live events, nature and documentaries.

The EOS C700 FF Digital Cinema Camera features the option to output HDR formats conforming to ITU-R BT.2100 over the monitor input, to assist in HDR production. ITU-R BT.2100 allows compatible monitors to simulate the HDR look of the final piece allowing for easier lighting and other technical decisions on set during the acquisition process.

The optional Canon Electronic Viewfinder (EVF-V70) also allows for an ITU-R BT.2100 simulation mode to allow the camera operator to see HDR visuals close to what is supplied on the monitor signal. This can further facilitate creative decisions on set where HDR reference equipment and output devices might not be available.

The EOS C700 FF Digital Cinema Camera supports User LUTs. Users can customize their own LUTs and load them on the camera for viewing and recording.

Additionally, video output from the camera can be monitored by selecting the ACES Proxy. Aces Proxy allows the camera to send a monitor output that simulates ACES space to a compatible monitor or device. Modifications made using the proxy output can be saved and later brought into the editing or grading suite to help insure changes and colour choices made on set are accurately reproduced in post.

Two independent image signals can then be detected at each photosite. By implementing phase-difference AF, smooth focusing is accomplished using Canon EF lenses with much higher speed and accuracy than was possible with previous technologies.

The EOS C700 FF has rapid one-touch AF (with a push-button) and continuous AF within approximately 80% of the overall image area. Face detection AF is another autofocus mode that can track a person's face in the frame and maintain focus on them. To further fine tune AF performance, the EOS C700 FF offers the ability to set the AF tracking speed and response.

A focus pre-set feature allows separate predetermined focus points to be selected, and when the SET button is pushed, the lens will move focus from one mark to the other.

"DiG!C" is Canon's acronym for Digital Imaging Integrated Circuit. The EOS C700 FF Digital Cinema Camera uses three DiG!C DV 5 image processors to power the advanced features of the camera. DiG!C works in conjunction with other subsystems of the camera such as the lens and sensor, to support the various features and the image processing engine.

The EOS C700 FF features in-camera ND filters to help save production time and help increase shooting versatility without the need to change filters. The internal ND filters are selected with the ND FILTER + and - buttons on the left side of the camera. The camera uses an internal, all glass motorized ND unit. This combination of ND filters allows 2, 4 and 6 stops of ND in normal mode and 8 and 10 stops in extended mode.

The EOS C700 FF supports anamorphic format lenses by electronically desqueezing the image in the viewfinder and on connected monitors for viewing. On the sensor users can take advantage of the camera's full 5.9K resolution by using 1.3x squeeze anamorphic lenses that cover the full 16x9 area of the EOS C700 FF sensor. Popular 2x squeeze anamorphic lenses that cover a native 1.2:1 aspect ratio on the sensor can be used as well using a 4:3 cropped area of the sensor.

Intelligent Metadata is Cooke Optics' open source technology of using encoders within the lens and contacts on the camera to display and record metadata with focus, iris, focal length, serial number and other helpful lens information. The EOS C700 FF PL is fitted with /i contacts. The metadata can be helpful on set to display lens information on monitors. Camera assistants can see an immediate graphic representation of depth of field. Script supervisors can get instant updates of lens, focal length, distance and aperture. /i Technology is used in VFX work for matching moves and determining lens parameters.

Two B4 mount adapters are available for the EOS C700 FF, B4 to EF adapter (MO-4E) and B4 to PL adapter (MO-4P). Canon's B4 mount adapter blows up the image slightly, resizing the 2/3” image circle to approximately 1” to correspond with native HD resolution on the EOS C700 FF sensor. This design helps minimize light loss through the adapter, while maintaining depth of field and range of the 2/3” lens. For power and control with B4 servo lenses the C700 FF features a 12-pin lens connector on the front of the camera body.

The EOS C700 FF can connect to a wireless network using a Canon wireless file transmitter (WFT-E6/WFT-E8). Using the WFT Transmitter, users can operate the camera and view live images using a Wi-Fi® connected device with a compatible web browser.

When an optional Canon GP-E1 GPS receiver is connected to the EOS C700 FF, GPS information can be added to the metadata. This is selected using the menu. GPS position (altitude, latitude, longitude) and time can be recorded where GPS service is available.

Canon's RC-V100 Remote Controller plugs into the EOS C700 FF via an RS422 connector on the rear panel. This optional accessory allows image quality adjustments and camera operations to be set from a distance.